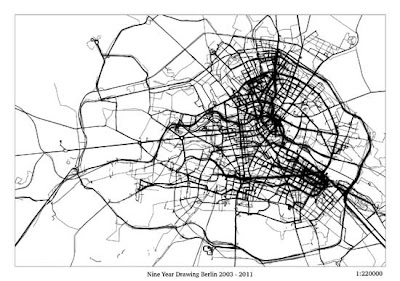 In the first half of 2012 Art Laboratory Berlin will present the exhibition Series Time & Technology, a reflection of how the radical technological changes of the last 20 years have influenced our perception of time and how we plan and structure our lives.

Over the years this practice has become part of everyday life, a form of private and personal 'sousveillance', in which the artists generate their own data, thereby reflecting the approach of those private and public agencies who collect all available data.

In addition to this installation, additional objects are presented, which have resulted from their practice of collecting: an archive of their mobile text messages, lists of personal vocabulary based on the frequency of use, as well as journals of their fluctuating moods arranged by season, time of day and location of each of the artists.

Posted by art laboratory berlin at 9:26 AM