Alanna Lynch works with living organisms, biological materials and performance, examining the politics of affect and questions of agency. She explores the aesthetics of disgust and fear, with a focus on embodied knowledge and non-conscious forces. In her project Potentials Lynch cultivated colonies of fruit flies, Drosophila melanogaster, through their whole lifecycle, making use of microscopic photography and performative display, confronting the visitor with containers of flies in a research-like setting. This evoked reactions ranging from curiosity to disgust. Her performances often explore bodies and identity as something complex and indefinable; both made up of ever more dividable parts of matter. For the performance Concealed and Contained she collected her own hair over many years and crocheted it into an ever-growing container which now covers her head and shoulders. In performance she stands naked, except for the self-made form of concealment which she then works upon: crocheting a continual work-in-progress.

Sarah Hermanutz researches the intersections of performance, technology, and ecology. Her sculptures, installations and performances are preoccupied with wetlands, amphibious creatures, gender and social cognition. Live Decomposition, an ongoing collaboration with sound artist Nenad Popov, was performed last year in Lisbon and Berlin. Video documents Hermanutz's hands as they work through an aquarium filled with mud, sand, living and dead wetland organisms, and other collected material. The artist has a keen interest in amphibians - both as organism and as metaphor. In Inside Bodies an axolotl in a jar becomes a point for human/nonhuman contact. Her work Salamander Mourning Veil, which includes drawings, photographs and performance, is an artist statement on both the mass extinction of amphibians and the degradation of wetlands, a melancholy act of caring and empathy in the spirit of Haraway's 'staying with the trouble'.

The exhibition project examines the aesthetics of viscosity. The two artists will also collaborate on an installation, which will form an interconnecting system of liquids, living materials, organisms and technology and encompass the common themes of their work.

Posted by art laboratory berlin at 7:00 PM No comments: 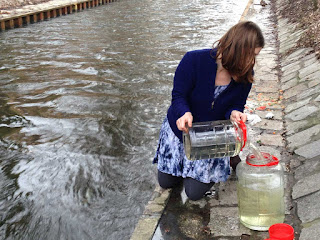 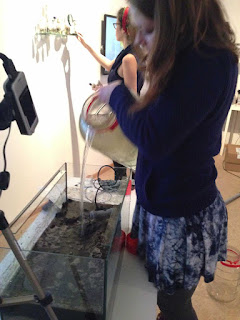 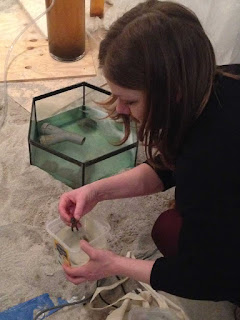 Posted by art laboratory berlin at 12:09 PM No comments:

Tarsh Bates (Artist, SymbioticA, The University of Western Australia, Perth)
On Being a Microbioartist: Making art in a microbiology laboratory

I explore the physical, emotional and political relationships between humans and Candida albicans(an opportunistic fungal pathogen of humans). These relationships span immunology and ecology, sexuality (both human and microbial) and evolutionary biology, public health and body discipline, institutional frameworks and kinship. I examine the biopolitical implications of the recent revolution in our understanding of the human body as being at least half non-human. In addition to the challenges of working with pathogens, the rapid simplification of genetic engineering technologies and increasing commodification of human microbes raises complex questions about whether these organisms have ethical standing: are they living or merely machines? This presentation asks the audience to consider the perspective of the microbe, of the pathogen, as a creature that is more-than-human, through a series of artworks developed in a microbiological laboratory.

We inhabit the microbial world. Microbes live on us, around us, and inside of us. Every single orifice of our bodies is populated by millions of microbes. We eat microbes, digest microbes, and defecate microbes. Whereas the human genome defines what we are as a species, the human microbiome now redefines the concept of self. As a scientist, I study the microbiome to detect novel types of interactions among bacterial communities. As a performance artist, I use my body as a canvas, tracking the evolution of my microbiome self. What if I become vegetarian? What if I travel to a different country? What if I practice celibacy for a month? Those are the kinds of artistic endeavours that can be directly translated into scientific data. In this talk, I will present my latest experimental performances with the microbiome as a way of questioning the aesthetics of the self.

There are different moments in current artistic processes that leave behind the humanist idea of the solo artistic genius and explore complex collaborations across disciplines and more provocatively across species and kingdoms. What does it mean when nonhuman agents perform in a 21st century artwork? While not proposing the nonhuman as artist, certainly the performative process of art production can be a vehicle for the nonhuman agent as well as multispecies entanglements. A short overview of the dynamic aesthetic field of making-kin shows various artistic methods, embracing the matter as such, a direct material engagement with the world (Barad). A new artistic paradigm proves to have overcome the nature/culture divide by implementing worldly terrains for multispecies encounter, intra-action and performativity in a postanthropocentric era.
Posted by art laboratory berlin at 11:25 PM No comments:

Artists have responded to non-human agency in the age of cutting age research in multi-directional ways. In my contribution I want to critically analyse a current artistic position referring to biomes as distinct biological communities and particularly to human microbiomes, which can be regarded as a the collection of bacteria, viruses, and other microorganisms that are present on a human body. My presentation will focus the art project FIFTY PERCENT HUMAN by the Austrian artist Sonja Bäumel (Gerrit Rietveld Academy Amsterdam), which is in search for a critical language, which is carefully balancing our imagination about human-microbe interaction and the great diversity of the human body’s ecosystem, mainly by using artistic, fictional and philosophical research tools.

Although bacteria are invisibly tiny single-cellular creatures, they represent the largest biomass on earth and manage to colonize nearly any site, including the human body. As the human microbiota, they contribute to keeping us healthy and happy. Based on our intimate relationship with them, we have learned to use them for food production and in biotechnology. On the other hand, some bacteria are nasty pathogens that cause infections that remained deadly to us before we discovered antibiotics, i.e. chemical weapons that bacteria themselves use against each other in their fight for food. While we have always envisioned bacteria swimming around as single cells, recent research has shown that they prefer to live in large communies termed 'biofilms'. The bacterial inhabitants of these 'cities of microbes' communicate and cooperate to produce an extracellular matrix of bio-polymers. This matrix not only confers protection, but allows bacterial biofilms to behave like tissues, i.e. to fold and buckle up into striking morphological patterns that even become visible to the naked human eye. By performing rapid morphogenetic movements based on an intricate inner structure, these biofilms are a prime example of 'active matter'.

Anna Dumitriu will discuss her project “Make Do and Mend" which references the 75th anniversary of the first use of penicillin in a human patient in 1941 and takes the form of an altered wartime women's suit marked with the British Board of Trade's utility logo CC41, which stands for 'Controlled Commodity 1941'. The holes and stains in the suit have been patched with silk stained with pink colonies of E. coli bacteria, grown on dye-containing agar. The genomes of these bacteria have been edited using a technique called CRISPR, to remove an ampicillin antibiotic resistance gene and scarlessly patch the break using homologous recombination with a fragment of DNA en-coding the WWII slogan "Make Do and Mend". Ampicillin is part of the penicillin group of antibiotics so with this artistic genomic edit, Dumitriu and Goldberg have used today's technology to return the organism to its pre-antibiotic era state, reflecting on how we might in future control and protect such biotechnological advances.


Posted by art laboratory berlin at 8:51 AM No comments:

"When the biological opens onto the mineral, and the planetary onto the cosmic, there arises a need not only to recalibrate the scales used to measure space and time, but also to focus on the forces that precede forms. One such force is metabolism, which operates as functions, cycles, and systems that enable the flux and transformation of matter. It infinitely generates novel forms of organization within and with the environment. Acknowledging that multispecies alliances are formed among both organic and nonorganic species by the forces of biological and mineral evolutions requires us to reconsider the questions of belonging and identity. The living/nonliving divide then appears to be no more than a convenience and a convention, because matter, both on earth and elsewhere, is self-assembling and evolving."

Dr. Monika Bakke is Associate Professor in the Philosophy Department at the Adam Mickiewicz University,Poznań, Poland. She writes on contemporary art and aesthetics with a particular interest in posthumanist, transspecies and gender perspectives. She is the author of Bio-transfigurations: Art and Aesthetics of Posthumanism (2010, in Polish) and Open Body (2000, in Polish) co-author of Pleroma: Art in Search of Fullness (1998), and editor of Australian Aboriginal Aesthetics (2004, in Polish), Going Aerial: Air, Art, Architecture (2006) and The Life of Air: Dwelling, Communicating, Manipulating (2011). From 2001 till 2017 she was working as an editor of a Polish cultural journal Czas Kultury (Time of Culture).

More information at http://www.artlaboratory-berlin.org/html/eng-event-40.htm
Posted by art laboratory berlin at 11:54 AM No comments:

Petrič's artistic research looks at vegetal life as the unchallenged frontier of estrangement, revealing the limits of human empathy as well as its anthropocentric underpinnings. Plants are, in their omnipresence, utterly foreign complexity and lack of identification elements allowing anthropomorphism, ideal subjects of study in an attempt to re-examine relations with the Other. The field of plant neurobiology has tried to uncover mechanisms of plant function by likening the physiology of plants to animal systems in order to raise awareness of the intricate, highly adapted life of plants; however, the plants’ cryptic chemically-based conversations, their biological inter-species networks, their centennial lifespans and non-centralized operation make them the benevolent aliens living among us. How can one draw together the world of human beings and that of plants, while resisting the temptation to sacrifice the specificity of either perspective and respecting the foreignness of vegetal life? The contribution lays out three performative projects –'Skotopoiesis', 'Phytoteratology' and 'Strange Encounters' – through which the artist explores radical and novel modes of human-plant intercognition, which, while discovering the vegetal, delineate our own borders to be overcome.

The environmental pressures that shape the evolution of a species root morphology are numerous. Roots have to take up nutrients and water by simultaneously blocking root feeding and colonizing soil biota. Depending on the ecological niche of a species, roots differ in their execution of this balancing act. Ecologists try to quantify these different strategies by measuring root morphological traits. The majority of land plants form mycorrhizal symbioses with soil fungi. Those plant-fungal interactions are mutualistic -meaning that both partners profit from the symbiosis. With their fine hyphal networks the fungi take up nutrients and water from the soil and transport it to the plant roots in exchange for carbon, which the plant photosynthesizes.
Additionally, they can protect the roots from pathogens. The plants fitness and the morphology of roots therefore varies in response to mycorrhizal colonization while the mycorrhizal fungi themselves are nonviable without a living root.

Posted by art laboratory berlin at 11:29 AM No comments: