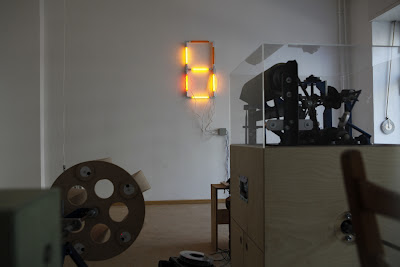 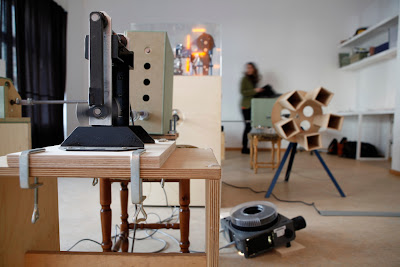 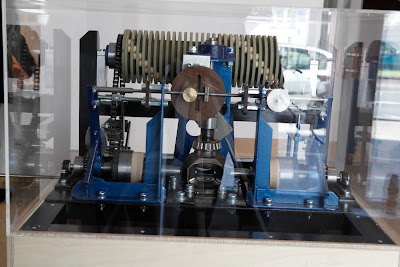 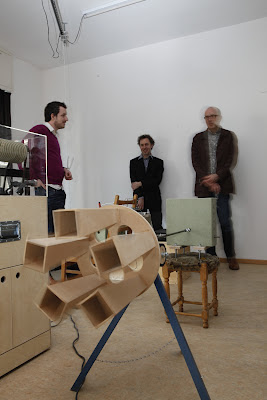 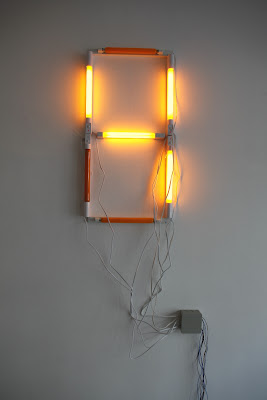 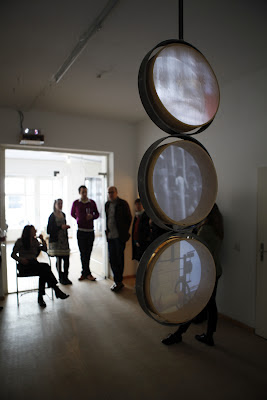 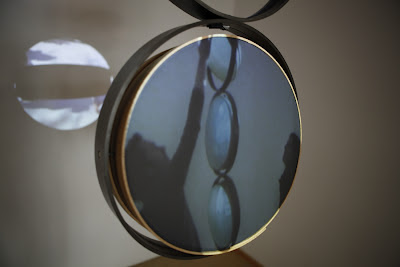 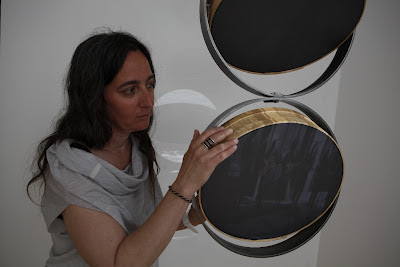 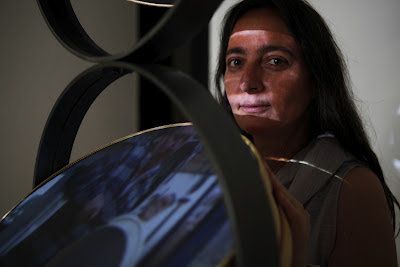 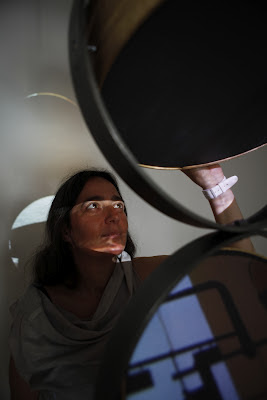 As part of the current exhibition series Time & Technology Art Laboratory Berlin welcomes you to the exhibition Fantastic Time Machines with new works by Shlomit Lehavi and Sam Belinfante & Simon Lewandowski. The two contributions deal with the phenomenon of time through synchronicity, simultaneity and succession. These artists have developed special forms of imaginary time machine.

In the front room the viewer finds The Reversing Machine (A Theatre of Kairos and Chronos), produced by the British artists Sam Belinfante and Simon Lewandowski especially for this exhibition. The installation alludes to the notion of Kairos as opportune time, as opposed to Chronos, the course of time. The artwork is a constructed mechanism, whose central piece, called by the artists a Time-Setter or Chronocrator, is an attempt to examine temporal perception by means of running different machines forwards and backwards. Both its analogue structure and its emphasis on bi-directionality (dual-direction) call modern conceptions of linear progress into question.

This palindrome is an artistic reflection on our contemporary life with its many simultaneously controlled processes and repetitive actions. “The central device (literally and figuratively comprising the functioning core) is a kinetic sculpture in the form of a self-reversing gearbox mechanism which will trigger and power various (forward and reverse) looping devices.” The drive shaft powers a series of machines (a turntable, a slide projector, moving lamp, etc.) – and then switches in reverse, forming a mechanical palindrome which in turn creates a poetics of dichotomy: on and off, forward and reverse, loud and quiet, dark and light.

“This behaviour is entirely determined by the mechanism, (not by any kind of digital controller) being consequently completely transparent – revealing both the what and the how of its action.” (Belinfante & Lewandowski)

In the back room Art Laboratory Berlin presents the work Time Sifter by the Israeli born and New York based artist Shlomit Lehavi who works primarily with new media and multi-channel video. Her video installation Time Sifter explores collective memory, collective forgetting and time based media as a contemporary time machine.

"Time Sifter is a viewer-controlled environment immersed in visuals and sounds” says Lehavi, “that plays on the theme of the time-machine in the digital age, and suggests a journey in time through motion, space and sound.” The projection surface, which resembles a totem pole, is a shaped steel construction with circular wooden sieves, hand-crafted in Istanbul and retrofitted with projection material. It represents both the mechanism and the metaphor of sifting time.

The video footage, taken by the artist, depicts movement through space at different locations over the last ten years. This repetition of similar actions – travel, work, the role of the flaneur - in different places creates a series of links over time and space.

The visitor in turn plays a crucial role in the functioning of this time machine: "Each sieve flips around the x-axis (initiated by the viewer). With each flip the video's content changes so the viewer has control over re-creating the environment, the video sequences and the narrative. Time Sifter aims to evoke a discussion on time and space in the digital age." (Shlomit Lehavi)

Fantastic Time Machines is supported by the German Capital Culture Funds and the Israeli Embassy in Germany.
Posted by art laboratory berlin at 3:56 PM No comments: 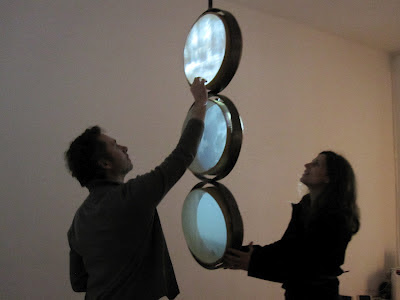 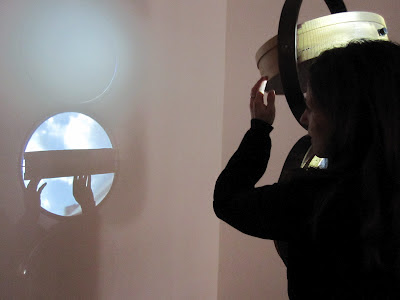 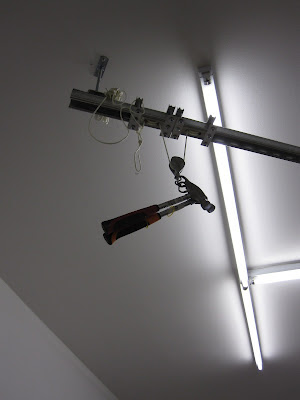 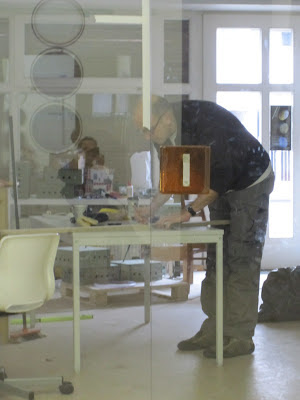 The British artists Sam Belinfante and Simon Lewandowski present the newly produced work The Reversing Machine (A Theatre of Kairos and Chronos) which alludes to the notion of Kairos as opportune time, as opposed to Chronos, the course of time. The artwork is a constructed mechanism, which the artists call a Time-Setter or Chronocrator and which tries to examine temporal perception by means of running different machines forwards and backwards. This mechanical palindrome is an outstanding artistic reflection on our contemporary life with its many simultaneously controlled processes and repetitive actions.

Israeli born and New York based Shlomit Lehavi is an installation artist specialising in the relationship between technology and mankind. She examines the theme of memory and its relationship to technology. Her video installation Time Sifter explores collective memory, collective forgetting and the role of individuals. By means of touching the changing projections in her work the visitor is allowed a fascinating form of participation and interaction.

The Time & Technology series is made possible in part by a generous gift from Michael Schröder.


Posted by art laboratory berlin at 5:46 PM No comments:

Over the years this practice has become part of everyday life, a form of private and personal 'sousveillance', in which the artists generate their own data, thereby reflecting the approach of those private and public agencies who collect all available data.
(More information) 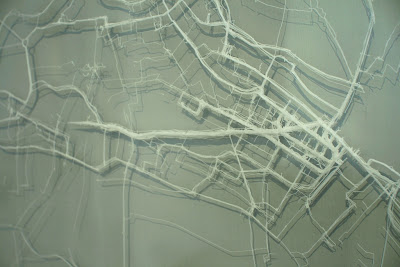 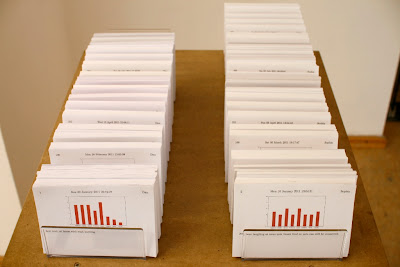 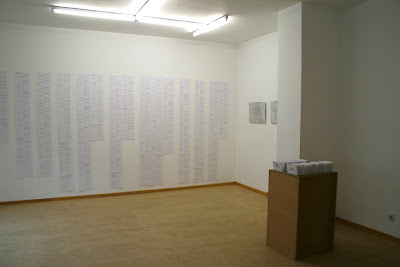 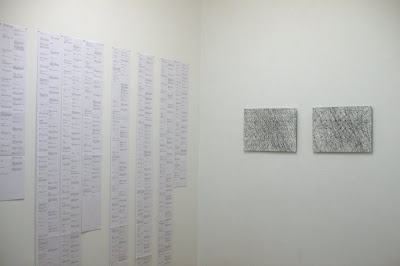 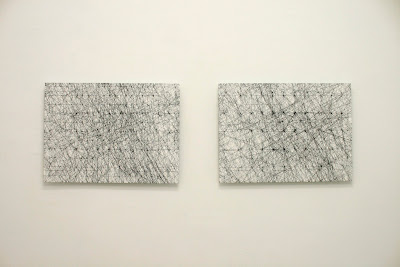 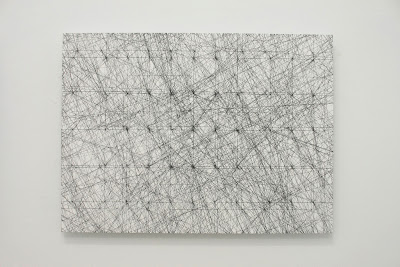 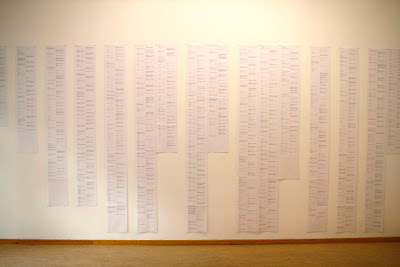 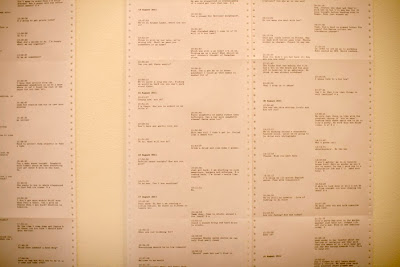 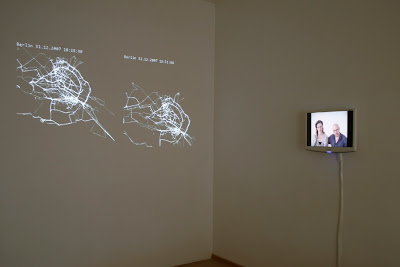 Photos by plan b
Posted by art laboratory berlin at 10:20 AM No comments: