Plastic has pervaded water, soil and our bodies. It is the new icon of our time. During the (Un)Real Ecologies: Microplastics workshop explored the presence of microplastics in the Panke River, near Art Laboratory Berlin. How do organisms and microorganisms exist with and construct with these human-made materials? We interrogated the water samples, to discover a new understanding of the reality of the Panke's ecosystem, with plastic present and wholly a part of it - a microcosm that allows us to ask: "what is nature?"

Kat Austen is a succession of experiences and an assemblage of aspirations. She creates artworks that explore multiple knowledges, from music to embodied knowledge to DIY science, focusing on emotional connections between what we consider internal and external. Kat is Cultural Fellow in Art and Science at the University of Leeds, lectures on UCL's Arts and Sciences BASc, and is Artist in Residence in UCL's Faculty of Maths and Physical Sciences. Previous residencies include NYU Shanghai Gallery and ArtOxygen. Kat was an inaugural member of the London Creative Network programme. She is based in Berlin.

Nana MacLean studied Biology at the UvA Amsterdam and has recently finished her Master studies in Molecular Biology at the University Potsdam. Besides her studies, she has been involved in projects that crossed borders between disciplinary styles and methods - embracing both speculative design and performative collaborations. As a PhD student, Nana is currently working on microbial communities in anthropogenic landscapes and plastic polluted grounds at the GFZ Helmholtz Center Potsdam. Her research focuses on Plastic as biological habitat, and furthermore explores future ecologies and areas of research that involve storytelling and other imaginative methodologies. Nana is based in Potsdam and Berlin.


The Panke river is a small river that starts about 20 km north of Art Laboratory Berlin close to the small town of Bernau. During its way down into the city Berlin, the Panke changes into a straightened urban stream that receives rain and mixed waters from the surrounding districts. We explored two sections of the Panke, an 'upper' part around ALB is bordered by parks, green shrubby watersides and a swampy floodplain. The more downstream we go, the more influenced the ecosystem will become by urban factors. The 'lower' part of the Panke around Gerichtstrasse already shows less water plant vegetation than on the 'upper' part. In order to collect (Micro)plastic from the water stream, we placed fine nets inside the river that collected all particles flowing through that part of the Panke overnight.

Plastics come in different shapes, textures and material properties. Their chemical properties makes them generally very resistant to natural degradation processes by fungi, algae or bacteria. However, the term plastisphere has been used by biologists to describe the living microworld attached to plastic particles in the environment. Surprisingly, plastic seems to be much more than just an human-made waste product: In marine ecosystems it was found that pieces of plastics carry a very specific community of fungi, algae and bacteria. Using a microscope, we can get a close and intimate look into their habitat. In the workshop examined the plastisphere of the Panke and observed the shapes and forms of how organisms interact with plastic. For this step, we chose some interesting particles from our catch and used the available microscopes to get a close look at plastics and living creatures. 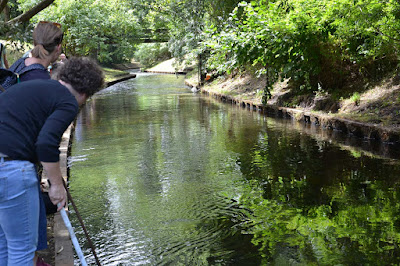 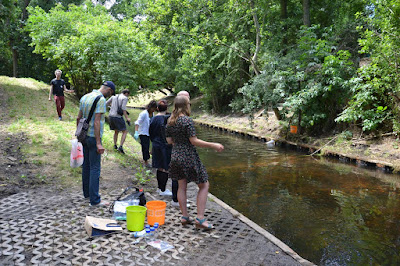 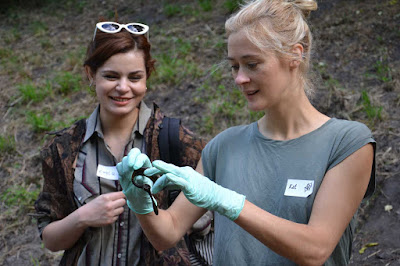 Furthermore, we used a two step chemical protocol for the analysis of (Micro) plastics in our water samples. In our case, plastics include hard plastics, soft plastics (e.g., foams), films, line, and sheets. Microplastic is defined by its size smaller than 5mm, so with our nets (200 microns) caught all sizes between 5mm and 0.2mm. During the two days of the workshop we split our samples into different groups, so that we could compare the different procedures with each other.

The solid particles in soil or waters are a mixture of minerals (abiogenic: not produced by living organisms), organic matter that are carbon-based remains from living organisms or their waste product and recently of synthesized anthropogenic compounds (?) that find their way into both terrestrial and aquatic ecosystems. 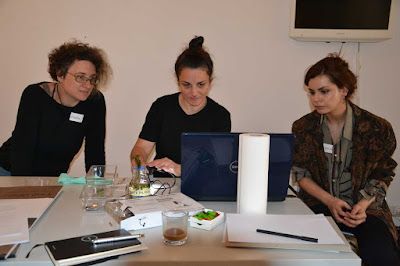 Each of these compounds have a specific density range and will either float or sink in a given liquid column. In order to divide those three fractions from our water samples, we separated them according to their density. Using a saturated salt solution created a liquid in which plastic and minerals clearly separate from each other. But first, we needed to remove all organic compounds, leaving only minerals and plastics! Adding hydrogen peroxide solution (30%) to your sample is a common method for the elimination of organic matter as it strongly reacts with all organic carbon.